Welcome to Wednesday Word, a weekly linkup for everyone, not just health and fitness bloggers. Each Wednesday you will have a single word prompt to write about.  Let your imagination run free and share with your readers your interpretation of that word, or simply use it as inspiration for your post. Today’s word is kerfuffle…..  I’d love to have you link up, and if you do, please remember to follow my six simple rules.

Perhaps the following story was more of a series of train wrecks, than a kerfuffle, but it’s fair to say that when all was said and done at DC’s one and only Hot Chocolate 15K, the resulting chaos created quite the kerfuffle.

Train Wreck #1:
We woke on that infamous race morning back in December 2011 to the promise of a beautiful day and race ahead. Bill, our Cruiser friends, and I piled into my Cruisermobile for the four mile ride across the Potomac River from our hotel to the race. As soon as we got on the Woodrow Wilson Memorial Bridge, we came to a complete stop – something completely unexpected at that hour on a Saturday morning, even on the beltway. We heard the radio announcer say that traffic was snarled because so many cars were trying to exit to the National Harbor for a race. Hmmm, that would be us… We sat on the bridge for an hour and twenty minutes going absolutely nowhere! We even saw multiple runners get out of their cars to run across the bridge to get to the race on time. People running on the beltway; are you freaking kidding me? We decided that since we had timing chips on our bibs and so many other runners were sitting on the bridge with us, we wouldn’t stress out and would stay in our warm SUV.

Train Wreck #2:
Eventually we got across the bridge, parked the Cruisermobile, and found our way toward the starting line of the 15K. BUT FIRST, we had to pick our way through the 5K runners coming toward us who had been accidentally started in the wrong direction. Yes, they were running toward us as we were trying to make our way from the parking lot to the starting line of our race!

Train Wreck #3:
We eventually made it to the starting line of the 15K and waited yet another hour because the the 8 AM start time had been moved to 9 AM to accommodate the rest of the runners who were still stuck in traffic.  At this point we were very glad that we’d waited on the bridge in our warm vehicle instead of getting out to run to the starting line. The expression on the face of the young lady front and center in this picture says it all. 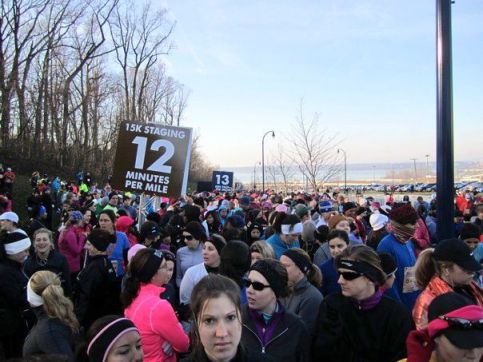 Train Wreck #4:
Once we started running, we relaxed and decided to just enjoy the course and make the most of our race, but before we knew it, we turned onto a coned off and crowded single-lane on a busy highway right next to traffic in the adjacent lane, resulting in breathing in the exhaust fumes from the dump trucks idling as we ran by.

Train Wreck #5:
After the race was finished, we’d stuffed our faces with Ghirardelli chocolate fondue and hot chocolate, and then headed to our car. Just as we got back on the beltway, we got caught behind the truck picking up race cones and watched as traffic was snarled for a little while longer…

And Then The Social Media Kerfuffle Began:
Driving home, we talked about the various things that had gone both right and wrong during the race. It wasn’t until we got on social media that we saw what a kerfuffle had ensued. Facebook and Twitter were ablaze with nasty comments from unhappy runners slamming the producers of the race for letting so many things go wrong. Let’s just say that there hasn’t been a Hot Chocolate race in the DC area since…

Note: To read my full 2011 Hot Chocolate 15K recap, click here. Much of the race was quite enjoyable, especially since I wasn’t racing it, and could just laugh at the various train wrecks happening all around us. And just to be fair, I’ve since read recaps from Hot Chocolate races in other cities, and haven’t heard too many complaints about those races.

Have you encountered any kerfuffles at races you’ve run?

This site uses Akismet to reduce spam. Learn how your comment data is processed.